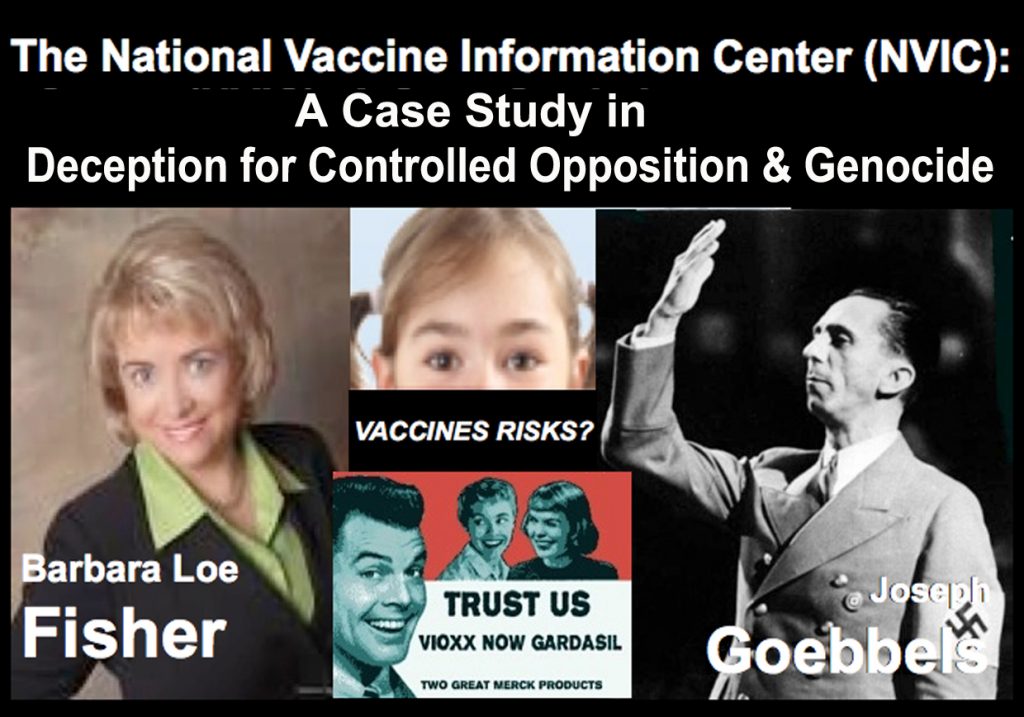 The NVIC, led by Barbara Loe Fisher, is “pro-vaccine and pro-choice.” Most people believe, however, they oppose vaccinations. Not so. Ms. Fisher never admits vaccinations evolved to exclusively serve drug industrialists who advanced eugenics (i.e., racial hygiene), the NAZI party, and todays biotechnologies for population control using blood contaminations from disease injections. Fisher heralds her accomplishments and alliances with congress, regulatory agencies, industry officials, and the leading role the NVIC plays in “consumer activism.” She NEVER apologizes for her role in advancing the primary legislation that has left millions of people sick and financially destitute (the Vaccine Injury Act of 1986) nor her roll in “controlled opposition” furthering the “Big Lie”–that vaccines are “generally good” but some pose problems.

The NVIC was founded in 1982 by petrochemical/banking industrialists subverting the purely grassroots Dissatisfied Parents Together (DPT). From there the NVIC’s evolution was based on massive pure propaganda administered principally by current President, Barbara Loe Fisher.

To gain control over DPT, Fisher, allied with vaccine industry lobby-linked attorney Jeffrey Schwartz. They stole the contacts of parents of vaccine-injured children generated by Marge Grant, a mother of a DPT vaccine-injured child who appeared on the Phil Donohue Show. Fisher and Schwartz ousted Grant to form the NVIC that has, ever since, commandeered near exclusive mainstream media coverage of the public’s opposition to vaccinations using the “Big Lie”–that vaccines are generally good. Thus, from the NVIC’s conception, the Rockefeller banking and petrochemical cartel has enabled it as “controlled oppostion” to advance world vaccination programs. Murder by injection is the “sacred cow” of “public health”–the “Big Lie” commanding genocidal depopulation and promoting profitable wars against germs and humanity in general.

Fisher appeals emotionally to audiences recalling her own son’s intoxication through vaccinations, yet still promotes the “Big Lie” to psychologically prepare Americans to accept vaccination injuries (like her son’s), and “immunization” policies, as generally acceptable. She slanders those telling the WHOLE truth about vaccinations, including Dr. Leonard Horowitz, as “RADICALS.” She defends this by claiming such censorship is needed for NVIC to have a political impact.

Fisher played a leading role in the “war” waged against vaccine injury compensation by BigPharma. By 1982, following 60-Minutes’s coverage of the deadly Swine Flu vaccine fiasco, and Marge Grant’s DPT appearance on national television, the “war” was turning against the drug industry. So Fisher and Schwartz were called upon to lobby with other pro-vaccinationists co-constructing the National Childhood Vaccine Injury Act of 1986. Schwartz, the NVIC’s first President, had worked for “Mr. Health”—Florida Rep. Paul Rogers who led congress to advance the 1976 swine flu vaccination program. Rogers then crafted the legislation eliminating vaccine victim compensation. He was subsequently rewarded by the industry with a position on the board of directors of Merck, Sharp & Dohme, the world’s leading vaccine maker.

Fisher’s propaganda techniques have been totally cynical. She bemoans all the catastrophes vaccines have caused, but then credits herself, the NVIC, Congress, and vaccine regulating agencies, thusly: “In 1986 Congress said ‘Yes. Vaccines can kill and brain-injure children,’ and created the federal vaccine injury compensation system that has so far paid out nearly $2 billion.” She purposely neglects the fact this system has left hundreds-of-thousands of vaccine injured families completely uncompensated. The $2 billion paid out is a drop-in-the-bucket compared to profits and actual damages.

Fisher wrote, “Forced vaccination, forced use of prescription drugs and forced quarantine in non-home locations . . . is the line in the sand for NVIC.” In other words, administering pharmaceutical genocide, or volunteering to accept it, is just fine for America’s leading “anti-vaccination” activist.

In reply, Dr. Horowitz wrote, “Wow! Let’s just concede who will go into the concentration camps, shall we? The street people? The Blacks in urban ghettos? The Muslims in Palestine? The old Jews in Florida who believe MDs are “Medical Deities?”

Federal officials advance a YouTube Contest and cash award allegedly to “involve” the public in the promotion of flu vaccinations. Yet critical public replies and commentaries are HEAVILY CENSORED by Google/YouTube.

YouTube statistics are reported to be moderately to grossly manipulated. Dr. Horowitz carefully watched the numbers of views that his Mexican Flu Outbreak Special Report received for 72-hours when it remained at the top of Google searches. He noted gross discrepancies in numbers of views reported over time, and watched his own hits on Google searches for “Dr. Leonard Horowitz” drop from more than a quarter million to less than 90,000 during this period of time.

Every major vaccine critic that has heralded the WHOLE truth about vaccines being used as genocidal weapons for population reduction has been demonized as “working for the Illuminati.” Included here is Dr. Horowitz, Joyce Riley, Alex Jones, Jane Burgermeister, Dr. Rima Laibow, Dr. William Deagle, and many others.

The NAZI Party, led by Joseph Goebbels, and Adolf Hitler, favored vaccinations for producing the “master race.” NAZI eugenicists, financially and ideologically advanced thanks to global drug industrialists operating through the Rockefeller and Carnegie families’ foundations, considered vaccinations a leading (most profitable) technology for genetic modification, blood intoxication, health degeneration, and population reduction. This technology was considered essential to maintain economic control in the wake of burgeoning labor unions and immigrant populations that posed threats of revolutionary uprisings. For Hilter, Goebbels, NAZI doctor Mengele, and the Rockefeller-led eugenicists, the “Big Lie” included the need for “public health” measures, including vaccinations, that could be used to kill and pharmaceutically-enslave people.

The NAZI Party was founded in 1933 by allied petrochemical/banking industrialists intent on subverting the liberal democratic Weimar Republic; thus, forming the corporate fascist NAZI party whose evolution was based on massive pure propaganda administered by Joseph Goebbels.

To gain control over the NAZI party and the German people, Goebbels allied with Adolf Hitler, and stole Jewish families businesses and properties. Goebbels and Hitler were supported by the Rothshield-Rockefeller banking and petrochemical cartel that largely funded the NAZI party and BigPharma Central–IG Farben–Germany’s leading industrial organization–to advance profitable WWII and global genocidal depopulation. Goebbels is most infamous for exerting totalitarian control over the media and information in Germany. As information minister, he perfected the “Big Lie” technique of propaganda, which is based on the principle that a lie, if audacious enough and repeated enough times, will be believed by the masses. The “Big Lie” holocaust victims were told was that the gas chambers were needed for disinfection to secure “public health”

Goebbels’ emotional appeals are legendary. He prioneered the “Big Lie” propaganda method to psychologically prepare the German people for aggressive war and the annihilation of civilian populations. Among other propaganda devices, he libeled, slandered, and accused many of Germany’s ethnic officials and national minorities (such as the Poles, the Jews, the French) of trying to destroy Germany, claiming that Germany’s belligerent actions were taken in self-defense–another outrageous “Big Lie.”

Goebbels played a leading role in the “war” waged against the jews and Axis power by BigPharma (including the OSS, and later the CIA). By 1940, and throughout World War II, Goebbels increased his power and influence through shifting alliances with other Nazi leaders. He became Hitler’s chief executive and most  trusted friend. By late 1943, the tide of the war was turning against the Axis powers, but this only spurred Goebbels to intensify the propaganda by urging the Germans to accept the idea of total war and mobilization. Goebbels remained with Hitler in Berlin to the end, and following the Führer’s suicide he was the second person to serve as the Third Reich’s Chancellor — albeit for one day. In his final hours, Goebbels and his wife, Magda, killed their six young children. Shortly after, Goebbels and his wife Magda both committed suicide.

Goebbels’s propaganda techniques were totally cynical: “That propaganda is good which leads to success, and that is bad which fails to achieve the desired result,” he wrote. “It is not propaganda’s task to be intelligent, its task is to lead to success.”

LETTER to DR. JOSEPH MERCOLA from DR. HOROWITZ About the NVIC

I am so sorry that you have issued a promotion for NVIC and your personal endorsement for Barbara Loe Fisher.

Are you aware that Marge Grant actually initiated the NVIC, and Barbara stabbed her in the back as encouraged and guided by BigPharma lobby attorneys? They LITERALLY STOLE from Marge the contacts data base that began the NVIC. Then they administered a gross obfuscation effort of which you are obviously another victim. The National Childhood Vaccine Injury Act of 1986 is a legacy to this criminal malfeasance.

Although it may look like a “grassroots” organization on the surface, the NVIC is actually an “astroturf” organization set up, with Barbara’s full knowledge, to express the exclusive voice of vaccine risk awareness activists legislatively, and via the mainstream media, on behalf of “CONTROLLED OPPOSTION” FOR THE VACCINE INDUSTRY!

I know this personally because I was a co-sponsor of the first national conference the NVIC and Barbara held. I met and interviewed Marge Grant there, and watched Barbara rubbing shoulders with the BigPharma linked attorneys that Marge exposed. Any serious objections to vaccination risks were CENSORED BY BARBARA. I was not even allowed to get up and ask a question. Barbara made sure of this censorship and obfuscation.

So, frankly, your plug on behalf of the NVIC and Barabara grossly dishonors your reputation and great honest works.

“Please don’t write me anymore as you are now banned and any further emails will be blocked by our firewall.”

Dr. Mercola was scheduled to speak and sell his products at the NVIC’s 2009 conference. It appears that he did not mind the consumer fraud. In fact, he continued to advertise it favorably, and subsequently became a leading voice for controlled opposition knowingly complicit in the genocide.