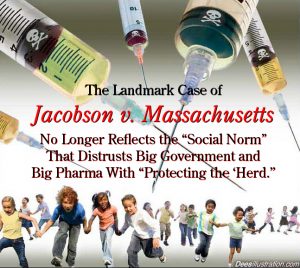 The history of inoculating populations with poisonous vaccines probably began in the 1700s, long before Edward Jenner experimented unsuccessfully with his versions of a smallpox vaccine.

Incredibly, showing the power and influence of English propaganda and gross deceptions accepted internationally, especially in Hawaii most horribly hit by smallpox during the mid 1800s, compulsory infant vaccination was introduced in England by the 1853 by the Vaccination Act.

Hawaii presents a terrific example of the history of vaccinecide barbarism in which “science,” political impositions, and religious hypocrisy pays important roles.

The Vaccination Act in England was applied by the Kingdom of Hawaii governors when smallpox broke out (curiously and suspiciously) that same year. But history books record a conflicting timeline for smallpox vaccine production and the emergence of the pandemic. In other words, the smallpox vaccine was not even available at that time when the 1840 Act made “variolation” for smallpox illegal.

The commercial small pox vaccine scheme was first tried unsuccesfully by Edward Jenner in England in 1796. But with a great amount of published fanfare, despite being rejected by Jenner’s contemporaries, the propaganda exploded its international acceptance nonetheless.

Long before Jenner’s trials, two reports on the Chinese practice of inoculation were received by the Royal Society in London in 1700 from two physicians. Dr. Martin Lister forwarded a report by an employee of the East India Company stationed in China and another by Clopton Havers. This prompted the British Royal Family to take an interest and carry out a “variolation” trial on prisoners in England.

Paul A. Phillips, a lay investigator, summarized findings on Jenner’s fraud, the vaccine’s inefficacy, and widely known harm, neglected by the BEIC imperialistic enterprise working to subdue targeted populations in China, India, Hawaii and America, at that time.

“We have been preaching that the hour of God’s judgments were at hand,” Mormon missionary Tanner wrote in Hawaii “and the small pox has borne a faithful testimony to the fact.”

“Our Brethren thay say it is a judgment from the Lord,” another wrote, and thay feal to trust in him. . . . [The Hawaiian] judge [possibly Napela] impresed a fine on all that did not git vaxenated of $5. Thay then was oblige to go & be vaxinated for thay had not the $5 to pay. I have sean them after thay ware vaxenated pick thare arm & then suck it with thare mouth to git the mater out.”

The ABCFM missionaries and Mormon elders would be subject to heavy fines if convicted of interfering with vaccination. So Mormon Saint Lewis directed all the elders and members to comply with the law.

Still, most resisted. One of the native elders, probably Kauwahi, circulated a petition among the saints. “The[y] wanted no Medical men near Them,” Thomas Karren wrote. “All the[y] wanted was the Elders Of the Church of Jesus Christ to Administer to them and to pray With them … I never Saw as much faith in my life.”

The epidemic began slowly—only two deaths by the first of June, the Mormon Saints reported in their correspondence. “By the 18th of June, 41 had died. In the following week, 38 died; the next week, 189.”

Raising more suspicion that the Anglos had brought the plague, officials reported at the end of June, “very few” saints had contracted the pox. “. . . [T]hose who have had it all got well by administering to them with oil and prayer except one who died.”

If accurate, only one death would have been more than “significant.” It was incriminating because the Mormons numbered 600 at that time. Nine or ten deaths might have been expected, not simply one.

The Mormon elders “blamed the Protestant clergy and the perceived traits of the Hawaiian people—indolence, backwardness, and licentiousness.”  The smallpox revealed the outrageous racism the missionaries modeled. After all, these were the “righteous” offspring of the slave traders. Apparently, in their view of The Law, stealing a man’s life or property was “godly.”

“I never even dreamed of seeing so lifeless a race of people as are those with whom my lot is at present cast,” wrote one LDS elder in Hawai‘I at the time of the pox plague.

Another blamed the Hawaiians, “Many, I believe, embraced the work at the commencement because it was something strange and new—a thing which this people are very fond of; others … calculated [this] was a Church without money and without price; … when they came to find the Elders do actually have to eat, drink, and wear clothing … it caused some to “return to the pit from whence they were dug.”… “Others … sigh for the days of Kamehameha I, when they were permitted to act out their heathenish rites, bow down to wood and stone—idols made by their own hands.”

In January 1857, Joseph F. Smith wrote to Heber C. Kimball in the Honolulu Hawaii Mission, “Whoredoms and abominations of the darkest hue are mere by-words among them. Yet the unlimited practise of such wickedness is inevitable, owing to the nature of their laws and hereditary habits and customs.”

As a result, many Mormon “saints” abandoned their faith and their posts. By March it was reported that “but few of the saints are liveing their religion, many have apostatized not being able to forsake their filthy, and abomnible ways.”

“. . . It will never be known how many Hawaiians died that summer. The marshal said nearly six thousand, 30 percent. In Honolulu, Reverend Lowell Smith lost 375 members, and Reverend Ephraim Clark, 516. Other areas of the island were relatively unaffected, while in Ewa, forty percent died. There, several months later, Reverend Artemas Bishop reported, “The whole state of society became disorganized. Almost every family was broken up. … The Sabbath was not well observed, & few meetings but thinly attended, & immorality prevailed. … There is [still] much apathy prevailing on the subject of religion.”

By the end of the smallpox epidemic the Mormons had suffered like “the heathens.” “Approximately 275 died—a third of all the Saints on the island, and survivors were dispirited.” T. Karren observed “a cloud of Gloom hanging Over This place. Those Crowded And spirited Meetings which Were Carried on hear a few Months Ago, has disapeared. Our Meetings In a great Measure has Been Broken up. We have had to Give up Our Meeting House. So great has Been the Distruction among this People that the[y] all most dispare of life. Even them that Servive.”

A half century later more religious involvement and opposition to smallpox vaccination was recorded in the case that formed the foundation by which people were forced, even against their religious beliefs, to get vaccinated. Mandatory vaccination legislation and public debate was built on the case of Jacobson v. Massachusetts, 197 US 11, 26-27 (1905) (See: “Jacobson v Massachusetts at 100 Years: Police Power and Civil Liberties in Tension” (Am J Public Health. 2005 April; 95(4): 576–581).

Jacobson was a religious leader who, in 1905, defended his congregation in opposition to the health department’s mandated smallpox vaccine in Boston. This was the earliest case signaling a “Holy War” over this matter of religious freedom versus police State enforcement of vaccination policies. This was the first time that the notion of “herd immunity” was raised in a legal forum.

But a careful read of the court’s decision in Jacobsen neglects consideration of the benefits to drug industry special interests. Jacobson v. Massachusetts established the legal precedent in the “Christian Nation” of America for giving States power over matters of public health for supposedly the good of the community (i.e., the “herd’). The “separation of church and state” was seriously diffused in Jacobsen’s case, in deference to religious objectors, damaging the defendant’s ministry and invoking, as was done in Hawaii, a $5 fine for resistors. (You can read more about this case and its importance by clicking here.)

Jacobson can and must now be reconsidered, arguably overturned, primarily due to “regulatory capture” of consumer protection agencies, such as the FDA and CDC by Big Pharma and Big Biotech, especially since these matters have been raised by presidential candidates and members of congress.  Regulatory capture, and  “legislative capture,” by special interests and corrupt lobbyists has made a mockery of “public health” and “medical science.” The suppression of alternative information, including the benefits of natural immunity and prevention, has made the “medical model” untrustworthy. Thus, Jacobson v. Massachusetts must be reconsidered, and the decision to impose force of law on mandatory intoxication must be overturned.