In that ‘extensive coverage,’ supposedly covering “both sides of the story,” the entire subject of cancer links to vaccinations was censored. As explained by Dr. Alan Cantwell during my interview of him and Dr. Horowitz seen on RevolutionTelevision.net, even Dr. Paul Offit, featured in that BBC Report in favor of vaccines, mentioned in his book this ongoing exploding problem. But Offit deceptively side-skirted the source of the monkeys and chimps used to produce the hepatitis B vaccines tested on Willowbrook State School children on Staten Island New York and gay men in Greenwich Village. Dr. Horowitz tracked the origin of leukemia-lymphoma-sarcoma cancers we call “HIV/AIDS” today to that specific vaccine. He solidly evidence his allegations by the actual Special Virus Cancer Program contracts and scientific records. Dr. Cantwell, similarly and independently, researched the epidemiology and science articles to conclude the same genocide. All TOTALLY CENSORED! 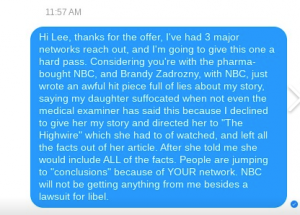