Bill Gates Met With Jeffrey Epstein Many Times, Despite His Past

Home Bill Gates Met With Jeffrey Epstein Many Times, Despite His Past

By Emily Flitter and James B. Stewart 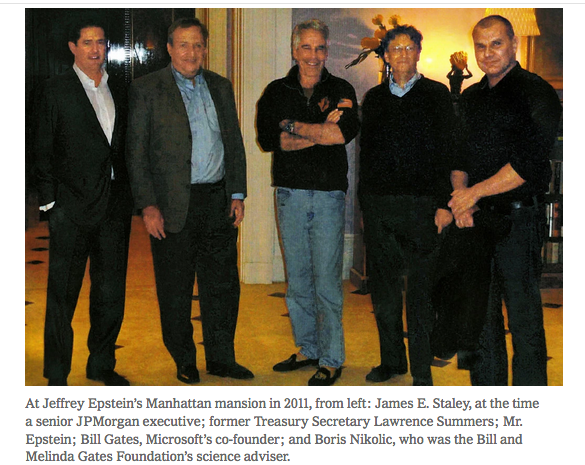 Jeffrey Epstein, the convicted sex offender who committed suicide in prison, managed to lure an astonishing array of rich, powerful and famous men into his orbit.

Few, though, compared in prestige and power to the world’s second-richest person, a brilliant and intensely private luminary: Bill Gates. And unlike many others, Mr. Gates started the relationship after Mr. Epstein was convicted of sex crimes.

Mr. Gates, the Microsoft co-founder, whose $100 billion-plus fortune has endowed the world’s largest charitable organization, has done his best to minimize his connections to Mr. Epstein. “I didn’t have any business relationship or friendship with him,” he told The Wall Street Journal last month.

In fact, beginning in 2011, Mr. Gates met with Mr. Epstein on numerous occasions — including at least three times at Mr. Epstein’s palatial Manhattan townhouse, and at least once staying late into the night, according to interviews with more than a dozen people familiar with the relationship, as well as documents reviewed by The New York Times.

Employees of Mr. Gates’s foundation also paid multiple visits to Mr. Epstein’s mansion. And Mr. Epstein spoke with the Bill and Melinda Gates Foundation and JPMorgan Chase about a proposed multibillion-dollar charitable fund — an arrangement that had the potential to generate enormous fees for Mr. Epstein.

“His lifestyle is very different and kind of intriguing although it would not work for me,” Mr. Gates emailed colleagues in 2011, after his first get-together with Mr. Epstein.

Bridgitt Arnold, a spokeswoman for Mr. Gates, said he “was referring only to the unique décor of the Epstein residence — and Epstein’s habit of spontaneously bringing acquaintances in to meet Mr. Gates.”

“It was in no way meant to convey a sense of interest or approval,” she said.

Over and over, Mr. Epstein managed to cultivate close relationships with some of the world’s most powerful men. He lured them with the whiff of money and the proximity to other powerful, famous or wealthy people — so much so that many looked past his reputation for sexual misconduct. And the more people he drew into his circle, the easier it was for him to attract others. 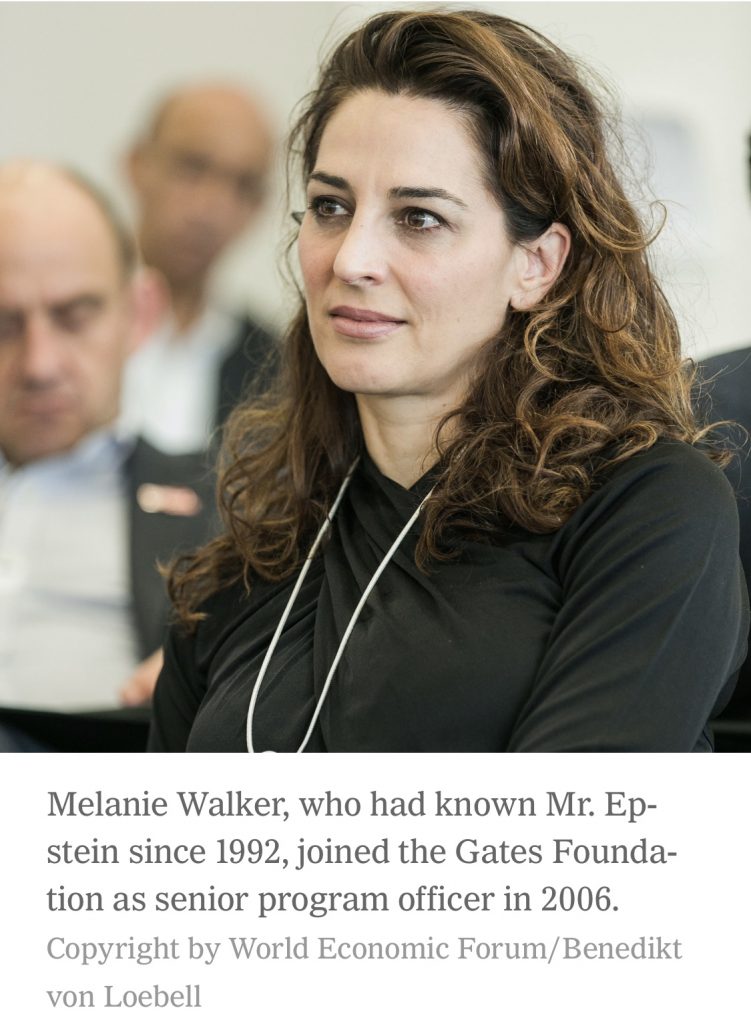 “Bill Gates regrets ever meeting with Epstein and recognizes it was an error in judgment to do so,” Ms. Arnold said. “Gates recognizes that entertaining Epstein’s ideas related to philanthropy gave Epstein an undeserved platform that was at odds with Gates’s personal values and the values of his foundation.”

Two members of Mr. Gates’s inner circle — Boris Nikolic and Melanie Walker — were close to Mr. Epstein and at times functioned as intermediaries between the two men.

Ms. Walker met Mr. Epstein in 1992, six months after graduating from the University of Texas. Mr. Epstein, who was an adviser to Mr. Wexner, the owner of Victoria’s Secret, told Ms. Walker that he could land her an audition for a modeling job there, according to Ms. Walker. She later moved to New York and stayed in a Manhattan apartment building that Mr. Epstein owned. After she graduated from medical school, she said, Mr. Epstein hired her as a science adviser in 1998.

Ms. Walker later met Steven Sinofsky, a senior executive at Microsoft who became president of its Windows division, and moved to Seattle to be with him. In 2006, she joined the Gates Foundation with the title of senior program officer.

At the foundation, Ms. Walker met and befriended Mr. Nikolic, a native of what is now Croatia and a former fellow at Harvard Medical School who was the foundation’s science adviser. Mr. Nikolic and Mr. Gates frequently traveled and socialized together.

Ms. Walker, who had remained in close touch with Mr. Epstein, introduced him to Mr. Nikolic, and the men became friendly.

Mr. Epstein and Mr. Gates first met face to face on the evening of Jan. 31, 2011, at Mr. Epstein’s townhouse on the Upper East Side. They were joined by Dr. Eva Andersson-Dubin, a former Miss Sweden whom Mr. Epstein had once dated, and her 15-year-old daughter. (Dr. Andersson-Dubin’s husband, the hedge fund billionaire Glenn Dubin, was a friend and business associate of Mr. Epstein’s. The Dubins declined to comment.)

The gathering started at 8 and lasted several hours, according to Ms. Arnold, Mr. Gates’s spokeswoman. Mr. Epstein subsequently boasted about the meeting in emails to friends and associates. “Bill’s great,” he wrote in one, reviewed by The Times. 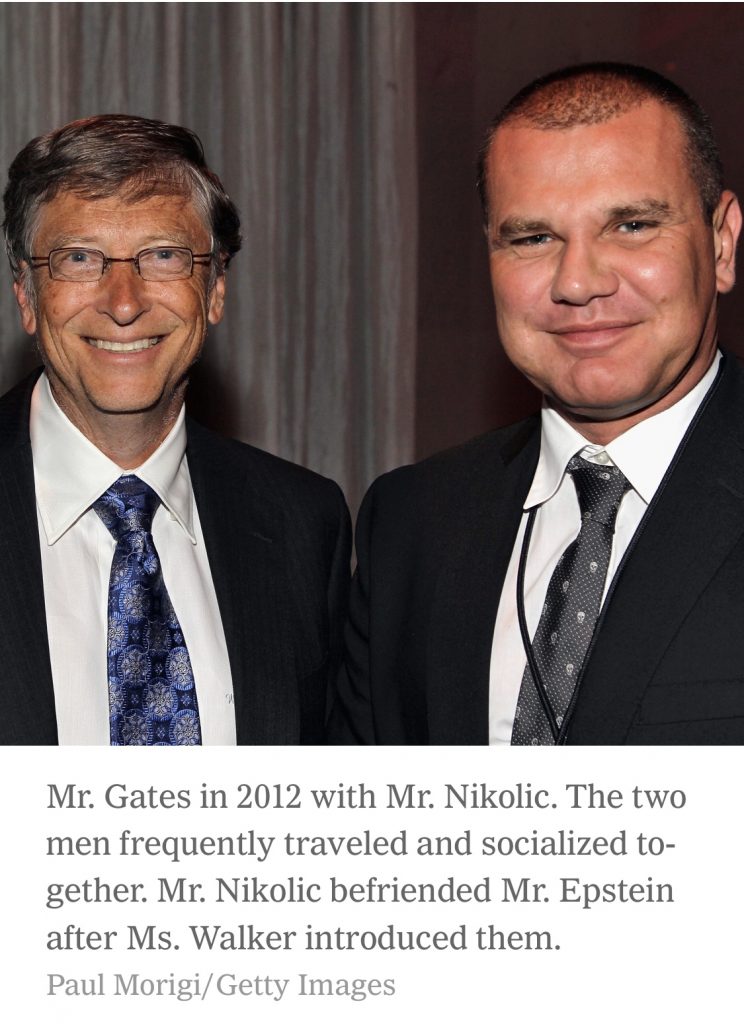 Mr. Gates, in turn, praised Mr. Epstein’s charm and intelligence. Emailing colleagues the next day, he said: “A very attractive Swedish woman and her daughter dropped by and I ended up staying there quite late.”

Later that spring, on May 3, 2011, Mr. Gates again visited Mr. Epstein at his New York mansion, according to emails about the meeting and a photograph reviewed by The Times.

The photo, taken in Mr. Epstein’s marble-clad entrance hall, shows a beaming Mr. Epstein — in blue-and-gold slippers and a fleece decorated with an American flag — flanked by luminaries. On his right: James E. Staley, at the time a senior JPMorgan executive, and former Treasury Secretary Lawrence Summers. On his left: Mr. Nikolic and Mr. Gates, smiling and wearing gray slacks and a navy sweater.

Around that time, the Gates Foundation and JPMorgan were teaming up to create the Global Health Investment Fund. Its goal was to provide “individual and institutional investors the opportunity to finance late-stage global health technologies that have the potential to save millions of lives in low-income countries.”

As the details of the fund were being hammered out, Mr. Staley told his JPMorgan colleagues that Mr. Epstein wanted to be brought into the discussions, according to two people familiar with the talks. Mr. Epstein was an important JPMorgan customer, holding millions of dollars in accounts at the bank and referring a procession of wealthy individuals to become clients of the company.

Mr. Epstein pitched an idea for a separate charitable fund to JPMorgan officials, including Mr. Staley, and to Mr. Gates’s adviser Mr. Nikolic. He envisioned a vast fund, seeded with the Gates Foundation’s money, that would focus on health projects around the world, according to five people involved in or briefed on the talks, including current and former Gates Foundation and JPMorgan employees. In addition to the Gates money, Mr. Epstein planned to round up donations from his wealthy friends and, hopefully, from JPMorgan’s richest clients.

Mr. Epstein thought he could personally benefit. He circulated a four-page proposal that included a suggestion that he be paid 0.3 percent of whatever money he raised, according to one person who saw the proposal. If Mr. Epstein had raised $10 billion, for example, that would have amounted to $30 million in fees.